Their 2-day meet pleased both men but not some 1.3 billion people in China 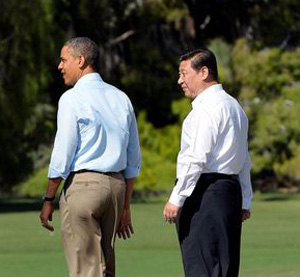 Obama and Jinping take a stroll outside huge Annenberg estate.

When President Barack Obama and Chinese President Xi Jinping met for two days in Palm Springs, they discussed issues that concerned both the United States and Chinese governments, but nothing that mattered most to both the Chinese and American people.

The world’s most populous nation wants to make the U.S. feel at ease with their relationship. In kind, the United States does not feel it should do anything to displease China.

What did Obama and Jinping talk about at their summit? First, they talked about North Korea being a “nuclear threat,” then they discussed combatting “super greenhouse gases,” and they tackled the subject of “cybersecurity.” All three topics discussed are of deep concern to both the U.S. and Chinese governments. The two countries are so tightly bound together economically – through industry and trade – that there is hardly a way they can afford to “displease” one another.

What is disappointing is that they did not take up the issue of political and religious freedoms for the more than 1.3 billion people on the Chinese mainland.