A threat to the people: Manny the boxer who condemns homosexuals as “worse than animals” and non-Evangelical Protestants as “hell-bound” now wants to be a Senator of the Republic

Emmanuel “Manny” Dapidran Pacquiao, currently an elected member of the Philippine House of Representatives, is running to be a Senator of the Republic. Is he qualified? Is he mentally and emotionally fit for such high public office?

Pacquiao is qualified to be a senator by reason of law – he meets the citizenship, age, and residence requirements – but he is neither mentally nor emotionally fit for office, public or private. The high school dropout’s only claim to higher education is an honorary degree in Humanities from Cebu’s Southwestern University “in recognition of his boxing achievements and humanitarian work.”

Simply being philanthropic does not cut it. No doubt Pacquiao has a kind heart and loves to help the underprivileged and underserved among his people. He has built schools, a hospital, and homes for the poor of his province of Sarangani. But that does not mean he has the education, training, and mindset to be a leader of his people. 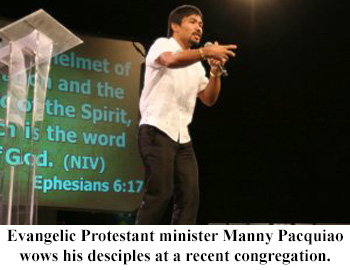 Manny Pacquiao – who is also an Evangelical Protestant minister – is a homophobic demagogue who appears to seek recognition to compensate for his shortcomings and poor beginnings in life. He wants to be a senator because he feels inadequate as a congressman, because his ego needs a bigger lift. He joined a religious group as a minister because he feels the urge to wow it over his people and win their utter reverence, knowing that they already admire and respect him for his boxing skills.

How can a person who has no respect for a large segment of his constituents (people he has called “worse than animals” for being gay, as well as folk who he proclaims are going to “hell” for not subscribing to his faith) possibly represent them? How can a person who has a terrible attendance record and who has accomplished absolutely nothing after many years as a member of the House of Representatives be useful in the Senate?

Pacquiao’s senate candidacy is a threat to the Filipino people.

A former Philippines newspaper publisher and businessman, Julius resettled in California, USA, where he simultaneously worked as an instructional and technical writer and engineering department manager and taught college for 26 years. Now retired, he serves as a member of the Alameda County Housing & Community Development Advisory Committee. He also served as a member of the City of Hayward's General Plan Task Force and the city's Planning, Personnel, Citizens Advisory, and Community Services commissions.
View all posts by Julius Willis →
This entry was posted in Uncategorized and tagged boxer, congressman, do-nothing public official, Evangelical Protestant, homophobic, Manny Pacquiao, senator, uneducated. Bookmark the permalink.

6 Responses to A threat to the people: Manny the boxer who condemns homosexuals as “worse than animals” and non-Evangelical Protestants as “hell-bound” now wants to be a Senator of the Republic