The battle for the liberation of Manila: in 144 pictures taken by US army personnel during and after hostilities

The battle to liberate Manila lasted a month – between February 3 and March 3, 1945. The Japanese were the occupiers from whom the city and its surrounding areas were being liberated by American troops.

My dad was an American-in-hiding during the Japanese occupation of the Philippines. He had refused to submit himself to internment at the University of Santo Tomas campus where he was told by the US Embassy in Manila to proceed with his family at the onset of hostilities in 1941. I was seven years old at the time. 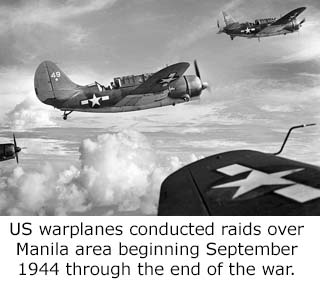 My dad went into hiding. He took me with him to seek refuge at the home of his oldest daughter (my sister Rosie) in Cubao, Quezon City, while my step-mother took my four brothers and sisters with her to lie low in Agoo, La Union in Northern Luzon. Hiding was quite difficult for my dad who was visibly Caucasian though my siblings and I easily passed for Filipinos.

My dad had a short-wave radio which he managed to keep undetected by the Japanese and from which he was able to get reliable information on the status of the war in both Europe and the Pacific. The Japanese military had earlier ordered everyone that owned radios to submit them to official censors so their “short wave” circuitry could be disabled.

The Japanese military controlled information published by local broadcast and print media – propagating lies about the war situation. For example, during American air raids, I would count between 100 and 200 US Air Force planes in the sky and watch them from a hillside dive-bomb and strafe the nearby Camp Murphy which was occupied by the Japanese air force. Very, very rarely would I witness an American plane shot down during a raid. Each morning following an air raid, however, the Manila Tribune would run a headline that would read: “200 YANK PLANES SHOT DOWN OVER LUZON.”

From short wave radio, we learned that American troops had made a landing in the north of Luzon – in Dagupan, Pangasinan. We also learned that General Douglas MacArthur made another landing on the southern island of Leyte, where he famously waded to shore.

American forces started bombing vital Japanese bases and fortifications in the greater Manila area in September 1944. In the first week of February, 1945, rumors started spreading that American troops were coming into Quezon City from the north on their way to Manila at a time when I would be celebrating my twelfth birthday. A regiment of Japanese troops had fortified themselves at the Catholic nunnery and the water reservoir in Quezon City. 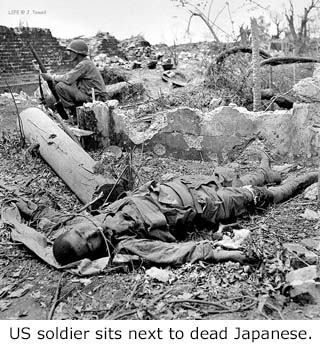 The video accompanying this story shows 144 images of the death and destruction wrought by the liberation. Ninety-five percent of these images are credited to John Tewell who retired from the US Army and resided in Manila until his death. It was Mr. Tewell’s wish that these pictures be shared and propagated. Other pictures used in this video and story are official US Army photographs.

A former Philippines newspaper publisher and businessman, Julius resettled in California, USA, where he simultaneously worked as an instructional and technical writer and engineering department manager and taught college for 26 years. Now retired, he serves as a member of the Alameda County Housing & Community Development Advisory Committee. He also served as a member of the City of Hayward's General Plan Task Force and the city's Planning, Personnel, Citizens Advisory, and Community Services commissions.
View all posts by Julius Willis →
This entry was posted in Uncategorized and tagged death, destruction, General MacArthur, Leyte, Liberation of Manila, US Army, World War II. Bookmark the permalink.