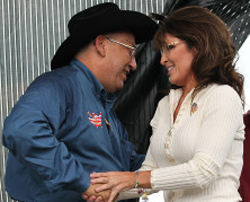 The kind of thinking like that of Ken Crow and his fellow Tea Party of America folk only reveals how shallow and narrow-minded they are. It’s so pitiful that at this time and age there are still people who believe in the superiority of their race, not realizing that every race and creed on earth has its strong and weak points and that only in an integrated community could man excel.

The Huffington Post reports (July 19) that GOP lawmakers got together in Washington to “rail against an immigration reform bill” that was passed by a bipartisan Senate earlier in the month. At the so-called rally, Ken Crow – cofounder of the Tea Party – spoke about “breeding” and “racial purity.” He is reported to have said that White Americans emerge from the blood lines of Thomas Jefferson, George Washington, and John Smith and “when you learn about breeding, you learn that you cannot breed Secretariat to a donkey and expect to win the Kentucky Derby.” He then added: “You guys have incredible DNA and don’t forget it.”

Didn’t Charles Darwin propose that Ken Crow descended from a donkey, or an ass?