At a San Lorenzo Cemetery: stories of the pioneers who blazed trails and built a region

There are the once famous, wealthy, and powerful men and women: John Lewelling, Elvy Lewelling, William Meek, and Fidela Meek, among dozens of others. And there are the lonely paupers and losers: Edward Lind, Ralph London, Albert Howe, Henry Nelson, William Johnson, and Charles Hardy, among hundreds of others. At the 3-acre San Lorenzo Pioneer Cemetery where they lay to rest they each tell their story, mutely.

The cemetery is located in the unincorporated community of San Lorenzo, in Alameda County, California. Surrounded by an old church, a shopping center, a railroad track, and the San Lorenzo Unified School District office complex, the cemetery is visited regularly by groups of school children and others who sign up for tours. Those tours and the words of the tour guides help bring back feelings and visions of the old days of adventure, conquest – and violence – which the men and women of the 1800s and early 1900s underwent during the exploitation and development of a good part of what is now known as the Hayward Area.

As you walk among the once-regal tombs of the noble and rich as well as the unmarked graves of paupers, you evoke images of – and feel – the successes and failures these pioneers experienced, and you think of other mysterious things that may have marked their lives.

Most of the very wealthy and powerful were men and women whose last names you could easily associate with the streets and sites around town: Meek, Lewelling, Stone, Marlin, Cameron, and Baumberger, among others. The paupers – almost all men – have nice but locally unimportant names: Higgins, Goff, Joslin, Lux, Winniger. 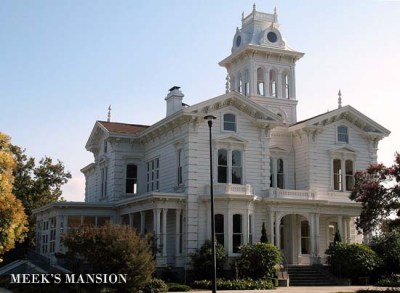 William Meek was a farmer, garden enthusiast, and public official. He owned about 2,650 acres of land (everything between what is now Mission, Hesperian, and Lewelling boulevards and Winton Avenue) in the Hayward area which he farmed and on which he raised cows and horses. He was 63 when he died on December 27, 1880. He built and lived in what we now call the Meek Mansion, a historic site.

John Lewelling was likewise a farmer who loved gardening. He is regarded as the “Pioneer of the Pacific Coast.” He was an Alameda County supervisor, a charter member of the California Agricultural Society, and president of Granges Bank of California. Asthma forced him to move to the Napa Valley where he built a ranch. Upon his death, his son Eli inherited his San Lorenzo property while his son Harvy inherited the Napa Valley ranch. His wife Elvy died in 1907 and is buried with him at San Lorenzo.

A Hayward Area Historical Society tour guide will tell you of the “who, where, when and how” of each of the major tomb occupants.

There is the story of three brothers – Isaac, William, and Thomas Yoakum – who were lynched and hanged in 1879 after having been convicted of murder.

And there’s the story of a man named Bertel Mahler and his wife Emma who are buried next to each other. A despondent Bertel committed suicide when his wife Emma passed away.

Little stories like these make one feel utterly mortal – but hopeful their own story would someday be told. There are close to 1700 tales to tell – one for each of the “important” people buried there as well as 803 stories for those that died penniless and lonely, and without a next of kin.

Many of the men buried at Pioneer Cemetery were trail-blazing farmers, frustrated prospectors, or plain adventurers who got carried with the crowd moving west without knowing what to do once they got west. Many of them were people moving in to squat on vast, unfenced landholdings.

The unmarked “paupers” graves have been affixed with neat little white crosses made by Boy Scout Girard Chilson in 2001 and installed by Girl Scout Leslie McGallian in 2002 under the coordination of Doris Marciel of the HAHS. A monument listing the names of the 803 paupers buried there was donated by the Hayward Area Historical Society and dedicated in 2008.

For a guided tour or visit to the cemetery, contact the Hayward Area Historical Society.