Donald John Trump is well-known for bad-mouthing, insulting, branding, and even threatening his fellow candidates during the primaries as he does now in the course of the presidential campaign. During the primaries, Trump consistently called Ted Cruz “Lying Ted” and referred to Cruz’s wife with uncivility and to Cruz’s father as the likely “assassin of President John Kennedy.” And he branded Hillary Clinton “Crooked Hillary.”

Now, in his response to the Democratic Party convention speeches – specifically Hillary Clinton’s acceptance message – Donald J. Trump angrily complains that “not one good word was said about me” by anyone throughout the four days of the event. A fellow at a bar who was watching Trump voice his protestation on TV yelled: “Cry some more, Cheating Dumb Trump! People are on to you, you charlatan!”

And because of what they said about him, Donald John Trump threatened to “hit” a couple of the Democratic Party convention speakers “so hard” their “heads would spin.” As if Donald John Trump was the only person entitled to say nothing good and everything bad about someone else – or as if he deserved any praise at all.

Donald John Trump is the last person on earth who warrants being complimented, mostly because there is nothing good that can be said of him. The handful of people who have a fine word for Donald John Trump are those who benefit from saying it – members of his family, business associates (until they get to know better), and the misinformed folk who are misled into voting for him.

Donald John Trump’s arrogant, egotistic, and self-centered behavior has resulted in his being abandoned by the Republican Party leadership and major party donors and supporters. It means a lot when the likes of former presidents George H. W. Bush and George W. Bush, former GOP presidential nominees John McCain and Mitt Romney, and party leaders Ted Cruz, John Kasich, and Marco Rubio, among others, boycott the party convention and refuse to endorse Trump’s candidacy.

We hope that Donald John Trump embraces this assessment of him and his character and not go ape over it. 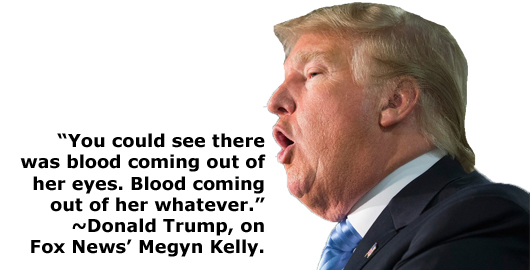