America, Beware! Donald Trump is a dangerous person who fits the profile of a mobster more than anything else 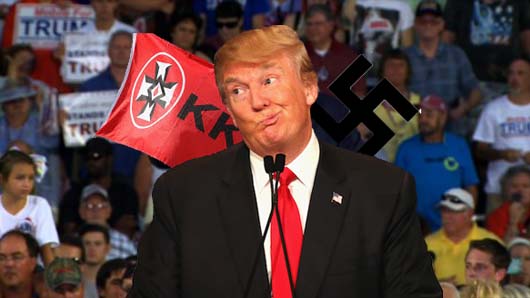 He talks like a thirteen-year-old schoolyard bully: “Bernie Sanders is lying when he says his disruptors aren’t told to go to my events. Be careful, Bernie, or my supporters will go to yours!”

He has never spoken a word on how he’ll govern or what he’ll do to solve the problems he says America is sick with. He’s typical of the old snake oil salesman – trying to get your money with empty promises.

His event attendees are almost all high school dropouts and uninformed racists and extreme right-wing “evangelical” Christians. They are people who equate bombastic talk with oratory and bullying threats with good leadership.

What ramps up his followers is not his idea of “making American great again” – nor is it his nonexistent political platform, vague government program, or dull brilliance. What excites his followers is his bombastic, bullying, tough-talking, street gang stance that is the prime time fare of ignorant, uneducated, and uninformed folk.

Donald Trump is a dangerous person. He fits the profile of an inner city gang leader more than that of the leader of a civil society. He is more like Adolph Hitler than anything or anyone else.

A former Philippines newspaper publisher and businessman, Julius resettled in California, USA, where he simultaneously worked as an instructional and technical writer and engineering department manager and taught college for 26 years. Now retired, he serves as a member of the Alameda County Housing & Community Development Advisory Committee. He also served as a member of the City of Hayward's General Plan Task Force and the city's Planning, Personnel, Citizens Advisory, and Community Services commissions.
View all posts by Julius Willis →
This entry was posted in Uncategorized and tagged Donald Trump, gangster, lyer, mobster, Republican, Trump. demagogue. Bookmark the permalink.