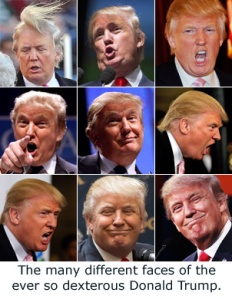 When a member of his campaign audience suggested to him that President Barrack Obama was a Muslim and not an American citizen, Donald Trump verbally agreed with the speaker on a side issue while silently acquiescing on the allegation regarding the president’s religion and citizenship. Donald Trump helped propagate a lie because it was convenient and beneficial for him to do so at the time.

When the issue of vaccination was brought up during a Republican Party debate, Donald Trump unequivocally said: “. . . vaccines cause autism.” The statement was apparently made to win the votes of a then-growing number of parents who opposed vaccination – and against the better judgment and advice of the medical community and the precepts of medical science. Doesn’t Donald Trump trust the scientific community?

When asked at a meeting of Evangelical Christians at a Faith & Freedom Coalition Dinner what his religion was, Donald Trump quickly said “I’m one of you . . . I brought my Bible. . .” conveniently forgetting for the moment that he was a Catholic who had joined the Dutch Reformed Church and who then became a Presbyterian that married his third wife in an Episcopalian church. It didn’t look like Donald Trump cared what church he belonged to.

Donald Trump will be anything and believe in anything that will help him win votes in his quest for the US presidency. He will flip-flop on issues, change his mind about policy, and tacitly or slyly agree to almost anything that will please his audience. That’s why we think he’s a flip-flopper, a vacillator, and a condescending opportunist. 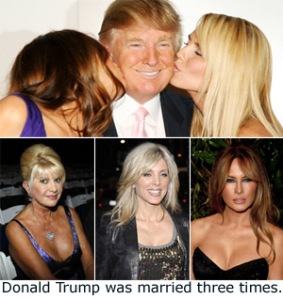 Donald Trump sometimes talks like a corner-store hangout. We could imagine and hear him say things like: “I can get pretty busy, because I have casinos to manage, people to fire, and lots of pretty young women to marry.”

Donald Trump believes he is a very religious person. We could picture him pontificating: “I go to church every Sunday, when I have the time. But for sure, I go to church on Easter and Christmas, whenever I can.”

Donald Trump is intolerant of non-Christians, especially of Jews and Muslims. And because he doesn’t know much about them, he skips talking about Buddhists or Hindus. He thinks Yoga is based on Christianity. In many of his off-the-cuff statements, Donald Trump is said to have commented: “I believe this world has a Muslim problem.” This leads us to imagine that we may have a Donald Trump problem!

As a flip-flopper, Donald Trump’s record includes having joined the Democratic Party only to switch to the Republican Party when he couldn’t get in any alliance with top Democrats. In the Republican Party, he has switched between being on the “establishment” and on the “insurgent” sides several times. While a believer in the right to abortion for many of his early years, Donald Trump now says he’s against any form of it.

Asked why he has switched sides on many political and social issues over the years, Donald Trump explained: “I’m very independent-minded. I’d vote for a person, not the party.” And Donald Trump added “I could vote Republican on one issue and Democratic on another issue.” Isn’t this how an unprincipled opportunist thinks?

One dictionary defines a pathological fabulist as “someone who lies constantly only for attention; who would lie about the most simple things; who exaggerates a situation to the point of fiction; who is very nutty, and does need mental help.”

What really is Donald Trump? We leave it up to you.

1 Response to Donald Trump: an opportunistic, pathological fabulist who flip-flops, vacillates and condescends